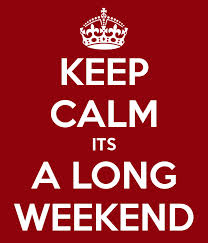 It is not very often that one gets to relish long weekends. In India, there hardly are long weekends that start unwinding from Friday and continue right to the ensuing Monday.

But in the other countries I have stayed and worked in, which were mostly Christian countries, Easter weekend is a sure-shot ‘taken-for-granted’ long weekend. And then there is the lovely Christmas break at the end of year that gives you a taste for voluntarily retired life for nearly a fortnight.

But since 2011, I have started fearing long weekends and breaks. Not because of the hiatus that makes the ascent back to work more difficult than it normally is; rather because of a psychological fear that grips me when such breaks arrive: fear of the unknown that will keep me bound within the walls of the house.

I had plans to relax, travel and do some local excursion over Christmas. Nothing defined on paper or booked really, but still the liberty of having time to my own use awarded a sense of freedom and excitement.

18 December 2011: We went to Movie World in Gold Coast. My wife had a fall while ice-skating.

That night: Inability to walk.Swollen knee. No sleep.

Diagnosis: Patella dislocation or Mild fracture. Advise use of crutches. Minimal movement for 3 weeks. Physiotherapy advised as due course for recovery.

I married my kitchen that Christmas. I spend most time with my stove top and sink – cooking, making coffee washing dishes and tending my wife. The Ice-pack became her favourite toy.

It came from my heart to care for her. But the heart was heavy as it carried the unfulfilled desires: relaxation, travelling and local excursion.

After a month the wife recovered after wearing the crutches as well as one wears an ornament. She wore it through shopping malls, restaurants and even flights.

Every resort is booked on the main island – courtesy the vacationing Strayans! Nothing booked for us yet but a day trip (at least) was the offing. Until the evening of April 19.

That evening, the squash court saw us both getting in as two archrivals, determined to squash each other to defeat. The game was aggressive. But I was leading 4 to 3. We were on the eight set.

Shobha hit a power-packed straight drive. The ball was about to land on to my side of the court but I instead chose to return a volley.

Bang! The ball left my Dunlop racket and dashed the front wall.

The re-bound off the front wall was powerful. It still carried an impressive momentum.

Shobha took a step back to let the ball loose steam after a bounce to make it easier for herself.

Her body bent back with a jerk. She punched it back solidly with a skid boast. And I heard her saying “Wait. Something happened… to my back”.

Next day: She rests on the sofa now, watching TV, with a newly bought Australian Wheat bag placed to her bag. I have heated it thrice since morning. The scent of Relispray and pain balm fills the room. It is a sprained lower back this time. I wish her a speedy recovery.

I see a Easter bunny chocolate sitting on my dining table, where I sit typing this away. I see a grin on its face. Is it trying to say something to me? Heh?

I am never the loudest guy in a room - I respect sound limits. I love to read and write and love ambient music at any time of the day because that always seems to resonates with my mood. View all posts by sudhiriyer